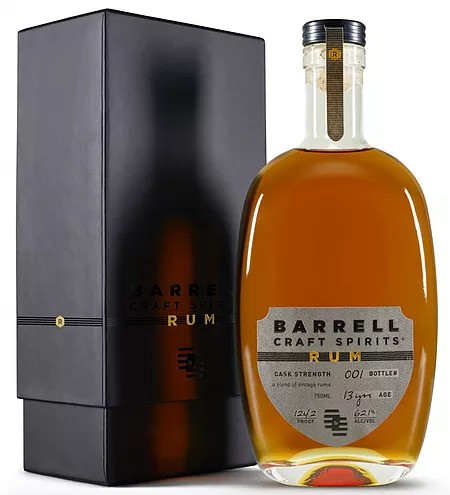 13-year-old Rum from Jamaica, Guyana and Barbados ​Crafted and bottled in Kentucky 124. 2 proof cask strength bottling The casks used for Barrell Craft Spirits Rum were on an Atlantic voyage that spanned almost a year before they reached us. Rather than releasing them as single barrels, we experimented with countless combinations and came up with what we think is an outstanding blend of vintage rums from Barbados, Jamaica and Guyana. This multi-layered rum was bottled at cask strength so you can experience its true flavor. ​ Appearance: Golden Brown ​Nose: Strong notes reminiscent of tepache, a Mexican fermented beverage made from pineapple rinds. Others emerge - fruity notes of green grapes and lime hull, earthy notes of oyster shell and potting soil, and very Jamaican vegetal notes of Kalamata olive, caper, pine needle tea, scallion, and pollen. ​Palate: Comparatively gentle, the Guyanese lending demerara syrup, purple plum, and crème de cassis, the Barbados bringing characteristic florals and spice: rosehip tea, cinnamon, and star anise. These notes are held together by a fresh maritime character -- seaweed, sea salt, and a little glycerine richness. ​Finish: The Jamaican hogo is back, as is the tepache, but it’s also spicy, with notes of ginger, turmeric, and catnip. Lychee makes an unexpected appearance. ​With a splash of spring water: The nose becomes much more approachable, displaying honey, lemon drops, echinacea, and jasmine, while still maintaining that Jamaican prickle of cornichons and white pepper. The palate grows more tropical with notes of passion fruit, ripe banana, toasted flaked coconut, and orange bitters, as well as mirabelle jam.