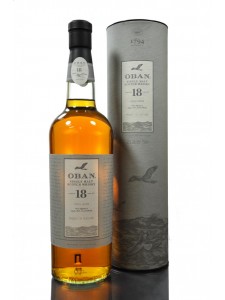 From one of the oldest distilleries in Scotland, Oban 18 Year-Old Single Malt Scotch Whisky is made in tiny lantern-shaped copper pot stills, among the smallest in Scotland. Their rich, fruity malt is then slowly condensed in wooden worm tubs that sit outside among the rooftops, before being aged in oak casks for at least 18 years. The sweeter notes of banana and toasted teacake, found subtly in Oban 14-Year-Old, are amplified. The rich sweetness of Oban 18-Year-Old is perfectly balanced with dry hints of sea salt, toffee, polished oak, salt, pepper, seaweed, distant smoke, and dried fruit.
Oban Single Malt Scotch aged 18 years Limited Edition