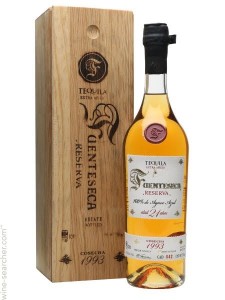 Fuenteseca Extra Añejo 21 Year: Seeking to create the world’s longest-aged tequila, master distiller Enrique Fonseca distilled this lot in copper double-column stills in order to achieve a leaner structure without too many agave vegetable fats, which could breakdown over the foreseen ensuing decades. From mostly 1984 plantings, these agave were harvested in late 1993, distilled just barely into the new year, and laid into barrel in February of 1994. The casks were stored for 10 years in a dry, earthen-floor aging room in the town of Atotonilco el Alto, before being designated as worthy of a longer aging, and moved to a higher, cooler climate of Chapingo, Jalisco, which sits on the slope above Atotonilco el Alto. The barrels rested in Chapingo for an entire additional 11 years before finally being bottled in 2014. All but one barrel was 180L Canadian white oak previously used for aging Canadian rye whiskey. The remaining barrel had been used to age a California white wine.