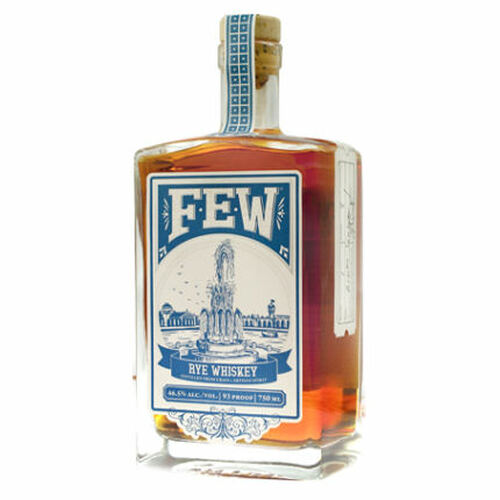 Reviewing craft-distilled American whiskeys is still a matter of degrees, especially when the craft distillers venture into the stylistic territory Few Ryestaked out so strongly by the established traditional distillers. The benchmarks of bourbon and rye are well-known, and to openly declare your competition with them is to invite direct comparison. I call it the "Evan Williams Test": is this craft whiskey good enough that I'd buy a bottle of it instead of yet another $14 bottle of the reliably well-made Evan Williams Black? Only the very best craft whiskeys can stand up to that.

By that test, Few Spirits Rye is clearly in the top tier of current craft whiskeys.

Although it's young, the whiskey is well-made and clean in character, not funky and flawed, which still counts for a lot these days. As I said in my review (an 89 score), "Straightforward rye crisps out of the glass in no-nonsense style; dry grain, sweet grass, and light but insistent anise almost wholly drown out the barrel character. " It's backed up on the palate, where you'll get more rye, some tarragon and dry mint spice, and then some oak in the warming finish.

That light barrel character is hardly surprising in a young rye, and we're not going to see much but young whiskey out of craft distillers for a while yet. So high marks to Few Spirits for making a very good young rye, one I've been using as a benchmark ever since I tasted it.
Lew Bryson, Whisky Advocate Editor

Bear witness to the revival of rye. Born of the hearty grain, our generous rye content is married with the sweetness of corn for a genteel interpretation of the venerable spirit. Aged in air-dried oak barrels, its spicy character transcends mere resurgence. This is the renaissance of rye. Few Spirits Rye Whiskey.