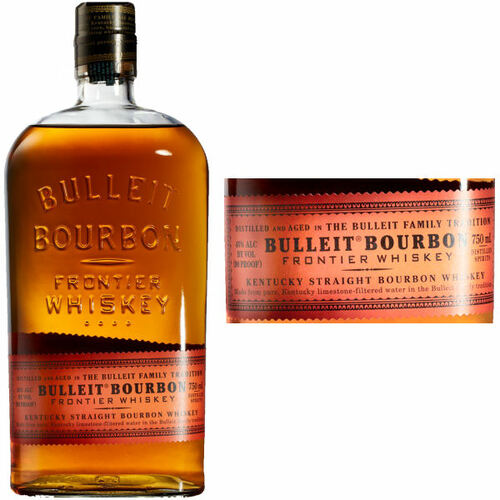 San Francisco World Spirits Competition: 2004 Gold Medal Award Winner - Top Bourbon:
In March, 2004 Bulleit Bourbon won the Gold Medal for being in the top of its class at the San Francisco World Spirits Competition - beating out more expensive and well known premium bourbons such as Knob Creek, Maker's Mark and Jim Beam Black. The competition included over 450 spirits rated by 16 renowned judges from the media, hotel, restaurant and spirits industries.

The Spirit Journal: Superb Rating (4 out of 5 stars)
"A HIGHLY RECOMMENDED distilled spirit whose attributes, in the opinion of the author, are of exemplary quality and character within the established standards of its category. An outstanding product which is worthy of a search. " (September, 2002)

A man like no other. His bourbon, likewise. In the 1830s, as a tavern keeper in Louisville, Kentucky, Augustus Bulleit set himself on a mission: to create a bourbon unique in flavor. Just as bourbon lovers today may sample many brands before finding their favorite, Augustus decided to experiment too - by creating bourbons of many different types and tastes. After countless small-batch trials, he came upon a bourbon with the character he had been seeking.

A bourbon almost lost forever. While transporting barrels of his bourbon from Kentucky to New Orleans, Augustus Bulleit vanished. What happened to him is still unknown, and his creation could have passed into history as well. But after more than a century, in 1987, his great-great -grandson Tom Bulleit stepped in. A lawyer by profession, Tom's lifelong dream had been to revive the family's bourbon legacy, started more than 150 years ago.

A legend made for today. Bulleit Bourbon is still distilled and aged in small batches. Kentucky limestone-filtered water provides the foundation for the bourbon's character, while charred American oak barrels lend a smoky backbone. Bulleit's distillers age the bourbon simply until it is ready. The result is placed into a bottle whose design has won awards of its own.

Enjoy the distinction of this Kentucky Straight Bourbon and experience the legacy for yourself.