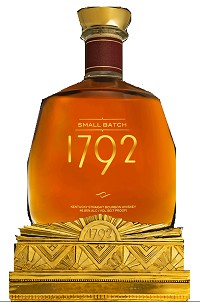 Sophisticated and complex. A distinctly different bourbon created with precise craftsmanship. Made from our signature high rye recipe and the marriage of select barrels carefully chosen by our Master Distiller. 1792 Bourbon has an expressive and elegant flavor profile. Unmistakable spice mingles with sweet caramel and vanilla to create a bourbon that is incomparably brash and bold, yet smooth and balanced. Elevating whiskey to exceptional new heights, 1792 Bourbon is celebrated by connoisseurs worldwide.

Producer
America's First Cocktail
Before there was a company, there was a drink. Antoine Peychaud, a Creole immigrant, operated a pharmacy on the French Quarter's Royal Street in 1838. With his background as an apothecary, he was a natural mixologist. His friends would gather for late-night revelry at his pharmacy. Peychaud would mix brandy, absinthe and a dash of his secret bitters for his guests. Later this quaff would come to be known as the Sazerac.

The Bar
After the drink, there was the bar. The cocktail immediately spread in popularity at the city's finest coffee houses, which was the term for drinking establishments during the mid-1800s. However, the cocktail is most strongly associated with the wildly popular Sazerac Coffee House located on Exchange Alley. In 1850, the owner Sewell Taylor institutionalized the drink at his coffee house by using only Sazerac de Forge et Fils brandy, which he imported and sold exclusively. The Sazerac cocktail received its name from this coffee house, where it was most often imbibed.

The Company
From the bar, a company was born. In 1869, Thomas H. Handy purchased the Sazerac Coffeehouse and began to acquire and market brands of liquor. He bought out the rights to Peychaud's Bitters in 1873. In the 1890s his company began to bottle and market the Sazerac cocktail, now made with rye whiskey instead of brandy. In addition, the company operated the Sazerac Bar on Royal Street. Later, Handy's former secretary, C. J. O'Reilly, chartered the Sazerac Company. Ever since (except for a stint as a delicatessen and grocery vendor during Prohibition), the Sazerac Company has distilled an ever-increasing line of fine spirits. Today, we are still an independent, American family owned company and proud owners of many of America's most venerable distilling companies - Buffalo Trace Distillery, A. Smith Bowman, Glenmore Distillery, Barton, Fleischmann, Medley and Mr. Boston.