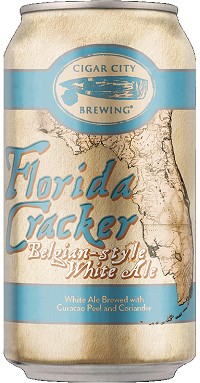 The Cracker Cowboys of Florida were colonial-era settlers, often of Scots-Irish descent, who arrived in Florida when Spain traded their territory of La Florida to the English. The term Cracker in Florida usage relates to the whip these “cow hunters” used to herd cattle in Florida’s Palmetto Prairies. Called Quaqueros by the Spanish, these hardy and hard working Cracker Cowboys helped to shape the history of Florida, the nation’s oldest cattle raising state. We brew Florida Cracker White Ale with unmalted wheat, orange peel and coriander and then ferment it with a Belgian yeast strain to give it a spicy and dry finish. Perfect for a warm day on the Palmetto Prairie. Technical notes ABV: 5. 5% OG: 12 IBU: 18 SRM: 3
Producer “In a state known for theme parks, Cigar City Brewing has become a major attraction for those who appreciate and seek out excellent beer. It opened with a flourish and spread its reach quickly, appealing to both hardened beer geeks and brew novices with eyebrow-raising flavors and commitment to quality. Capitalizing on the Latin culture and tobacco-manufacturing history of Tampa Bay, Cigar City highlights those strengths on its labels and in its beer names and recipes. Many of the beers it produces - Jai Alai IPA, Improv Oatmeal Rye India-Style Brown Ale, Cubano-Style Espresso Brown Ale - reflect the sensibilities and ingredients of Florida. One of Cigar City Brewing’s most sought after beers is a special release called Hunahpu’s Imperial Stout. The 11 percent ale is aged on cacao nibs, Madagascar vanilla beans, ancho chiles, pasilla chiles, and cinnamon. ” - John Holl, The American Craft Beer Cookbook At Cigar City Brewing we make beer we like to drink and toast those who choose to drink with us. Behind all our beer is the philosophy that quality is achieved by giving first rate ingredients to first rate people in a space where they are free to pursue their passion. We acknowledge that what we do at Cigar City Brewing isn’t for everyone, but we welcome all.