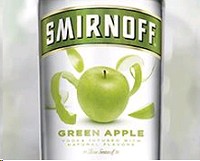 Enjoy a splash of the fresh fruit flavors of ripe green apples in SMIRNOFF GREEN APPLE TWIST and soda.

When the Bolsheviks took over, the distilleries were shut down and P. A. 's son Vladimir was chased out of town with pitchforks and also dinner forks, since the whole thing happened suddenly and not everyone had a pitchfork with them. Vladimir Smirnov was able to flee to Constantinople and then eventually settle in France where he sold vodka under the name Smirnoff. Now safely disguised by a new name and a slightly offensive fake French accent, Vladimir revived the brand.

Lots of other interesting stuff happened. Vladimir married a model and sang in a band and grew a series of beards, but probably the best thing he did was bring a triple distilled, 10 times filtered, award winning, cola-improving, martini-making vodka to the world. For former czars and current stars. For vodka connoisseurs and people who just like vodka. For everybody.