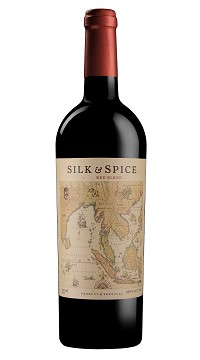 Wine maker notes Silk & Spice represents the exceptional flavors made possible by the Portuguese terroir and indigenous grapes, and also the exotic spices and aromas that Portuguese explorers discovered from the ‘silk and spice’ routes to the far east in the 1500’s. Silk & Spice is a testament to Portugal; and with its quite literal ‘silky and spicy’ taste profile, it is a celebration of Portugal’s capacity for silky, exotic wines with deep, rich layers and intense berry-fruit flavors. The route from Europe to the Indian Ocean - known as the “Silk & Spice Route” - was pioneered by Portuguese explorer Vasco da Gama, who rounded the Cape of Good Hope in 1498. Flavors like nutmeg, cinnamon, cloves and pepper changed world cuisine, while silk from China became prized for its luxurious touch. An original XV century map on the label shows the Bay of Bengal, separating South and Southeast Asia; the Portuguese coat of arms, a historical graphical element dating to 1248; and two caravels, a small, highly maneuverable boat developed by the Portuguese in the 15th century solely to explore the West African coast and arrive at the Indian Ocean.
Producer Sogrape Vinhos was born of the will and courage of a group of friends. In the difficult economic and political environment of 1942, they decided to stake everything on the visionary talents of one man. This man had the vision to create and develop an innovative wine company with a difference, one which could make and promote Portuguese wines on a global scale. This vision belonged to Fernando van Zeller Guedes, whose character and forceful personality paved the way for a successful venture that many believed was doomed to fail from the outset. The unparalleled foresight and vision of Sogrape’s founder, resulted in the creation of the first global Portuguese wine brand - Mateus Rose. Sold in over 120 countries, this proved to be such a resounding commercial success that it provided the decisive momentum for the growth as well as affirming the leadership of which the Company is so proud. The willingness to innovate and the ambition to do things differently - along with respect for tradition and the values of ethics and responsibility - marked the birth of an organization that has proved capable of preserving its founder’s vision and adapting to inevitably changing times. Today, led by the third generation of the founding family, Sogrape Vinhos is ever more closely dedicated to meeting the founding objective: to bring the world quality Portuguese wine brands, with sufficient volume to satisfy the needs of different market segments. From the pioneering days of buying barrels of wine from small producers in the Douro for processing and bottling in a rented cellar in Vila Real, Sogrape Vinhos has steadily grown. Continuous investment has expanded and developed the company’s assets and workforce to such a degree that Sogrape Vinhos owns over 830 hectares of vineyards in all the key Portuguese wine regions. Nowadays, the full scope of Sogrape Vinhos is clearly demonstrated by the breadth and weight of its portfolio. At first glance, what immediately stands out is the presence of two major global Portuguese wine brands - Mateus Rose and Sandeman as well as the prestigious wines of Porto Ferreira and Offley. Added to which are the renowned specialist brands that represent the major Portugese wine regions. Beginning with the most famous Portuguese wine of all, Barca Velha, the pride of Casa Ferreirinha (Douro) and continuing with the elegant wines of Quinta dos Carvalhais (Dao), the vibrant Herdade do Peso (Alentejo), the fresh Vinhos Verdes of Quinta de Azevedo and Gazela, and the versatile Grao Vasco (Dao), to name but a few. To tell the story of Sogrape Vinhos it is essential to retrace the origins and evolution of the plan conceived by this visionary man. And then to appreciate how his successors have inherited his values and pursued them with dedication, vigour and expertise to grow and develop Portugal’s leading wine company. Above all, the achievements of such a large team are promoted with pride and sustained by the ambition to innovate and enhance all that Sogrape Vinhos has to offer.