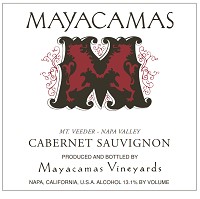 Producer Mayacamas Vineyards is located in the Mayacamas Mountains that divide the Napa and Sonoma valleys. Near the summit of Mount Veeder, the old stone winery was dug into the side of a dormant volcano crater in the late 19th century. Fifty-two acres of vineyards are planted on mountainsides ranging from 1,800 to 2,400 feet above sea level. Obsidian arrowheads and stone grain-grinding bowls found on the property bear silent testimony to Mayacamas’ first human inhabitants, the Native Americans of the Wappo tribe. It is from the Wappo language that the name ”Mayacamas” derives; believed to have meant ”the howl of the mountain lion”. But other possible meanings of the word exist: ”the source of the water”, referring to the springs and headwaters of creeks that feed the Napa and Sonoma Rivers, a ”standing place” referring to a trail marker, or a human scout. Perhaps, in some way lost to present understanding, ”Mayacamas” meant a combination of all of these ideas to the Wappo. But, as the language was never written, and its speakers are no longer with us, the original sense of the word Mayacamas remains shrouded in the past. What remains today is a homage to the first meaning, ”the howl of the mountain lion,” on the Mayacamas label, in the emblematic ”M” which bears two lions dancing within. THE LEGACY The Mayacamas winery was built in 1889 by John Henry Fisher, a German immigrant who first landed in Philadelphia, where he worked as a sword engraver. Later he moved to San Francisco and went into business as a pickle merchant. Fisher established Zinfandel vines and raised the edifice of the winery on the grounds of an old sheep ranch at the end of the steep, dusty, Redwood-shaded trail on Mount Veeder. He named it Fisher and Sons. He sold his wine by the barrel, ferrying the barriques by barge from the dock in the Napa River south across the bay to San Francisco. In 1906, the San Francisco earthquake and fire leveled Fisher’s pickle business and he was forced to declare bankruptcy. Soon thereafter, the winery estate on Mount Veeder was sold at auction on the front steps of the Napa County Courthouse for $5,000 in U. S. Gold Coins. The winery officially fell into disuse until the end of Prohibition, although the new owners, Pietro and Maria Marenco did bootleg wine and grappa in the conveniently remote cellar. They also sold wine legally to the Catholic Church for use at Mass. The Marencos sold the winery to Henry Brandlin, whose family today thrives as vintners on neighboring Mount Veeder properties. Brandlin, in turn, sold the property to a British gentleman, Jack Taylor and his Californian wife, Mary. The Taylors re-christened the estate Mayacamas Vineyards upon purchasing the land in 1941, the year of the London Blitz. Jack was escaping Hitler’s falling bombs for a new, pastoral life. The Taylors planted Chardonnay and Cabernet Sauvignon, and inaugurated the biannual Mayacamas newsletter, which announced new releases of wines and described their rough-hewn life on Mount Veeder, which maintained an air and spirit of pioneering, with no electricity yet on the mountain and a very basic infrastructure, including a gravity-flow winery design. In 1968, ownership was assumed by Robert and Elinor Travers. Bob had worked at Heitz Cellars, living in a cottage on the Martha’s Vineyard property in Oakville. Bob’s apprenticeship with Joe Heitz, as well as his scientific background as a petroleum engineer at Stanford University, put him in good stead for his new career. He loved the land at Maycamas and saw its potential for producing wines of great character, depth, complexity, and longevity. Together, the young couple focused their efforts on Cabernet Sauvignon and Chardonnay, with Bob as chief winemaker. JUDGEMENT OF PARIS In 1976, Mayacamas Cabernet Sauvignon, vintage 1971, was selected for the ”Judgement of Paris” tasting, pitting a selection of the finest American wines against a similar collection of top French growths. Mayacamas Cabernet Sauvignon was also included in the 10-year and 30-year replays of that landmark event (in 1986 and 2006), which collectively solidified the tasting’s statement about the legitimacy of the best American wines, and the American wine industry in general. More than any other single event, the Judgement of Paris established American wines as being among the finest in the world. True to form, the notoriously long-lived Mayacamas Cabernet Sauvignon showed better with time. In the original tasting, it placed 7th. In the second tasting, in 1986, it placed 2nd, beating all of the French entries. In the final tasting of 2006, which as much as anything described the wines’ ageworthiness, the Mayacamas tied for 3rd. , appropriately enough with Heitz Martha’s Vineyard, again out-placing all French entries. For four decades since, Mayacamas has remained a source of classical, balanced, intense wines with an unmistakable rustic mountain character. In July 2013, Mayacamas was purchased by Charles Banks and his wife, Ali, in partnership with Jay Schottenstein and his son, Joey. Andy Erickson and Annie Favia will lead the winemaking and viticulture at the estate. “We are only the fourth owners in Mayacamas’ distinguished 124-year-old history. We are honored and grateful to become stewards of this unique property; truly a jewel in the crown that is Napa Valley. We are excited to continue the legacy that has been created at Mayacamas. ” - CHARLES BANKS