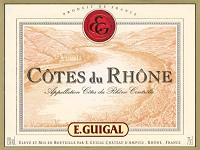 Producer ”The history of the GUIGAL family reflects the glory of the wines of the Cote-Rotie. Three generations working with land over 24 centuries old. » The Guigal Estate was founded in 1946 by Etienne Guigal in Ampuis, a small ancient village and cradle of the Cote-Rotie appellation. It shelters a unique vineyard where the vines and the wines have been famous for 2,400 years. Arriving in 1924 at 14 years old, the founder vinfied 67 harvests in Cote-Rotie and, at the beginning of his career, took part in the development of Vidal-Fleury establishment. In 1961, although still very young, Marcel Guigal took over management of the Establishment beside his father who was stricken suddenly with total blindness. In 1973, his wife Bernadette joined him and they worked together to develop the family business. In 1975, their son Philippe was born. Today he is the Estate’s winemaker. With his wife Eve by his side, he represents the third generation and continues the family work in the service of the Great Wines of the Rhone Valley. Since 1946, hard work and perseverence have born fruit and certain events attest to this, notably the purchase of the Vidal-Fleury Establishment in the mid ‘80s. Although belonging to the Guigal Estate, Vidal Fleury maintains commercial and technical autonomy. Ten years later in 1995 the estate acquired the famous Chateau d’Ampuis, an important historic and oenological monument whose long history is directly linked to the Cote-Rotie appellation. An ancient fort built in the 12th century, it was transformed into a Renaissance chateau in the 16th century. The chateau is situated amongst the vines and bordered by the king of rivers: the Rhone. The Chateau d’Ampuis has become the headquarters of the Guigal Estate whilst the offices and the cellars remain in the ancient small village of Ampuis. In 2001, the Guigal Estate expanded through the purchase of both the Jean-Louis GRIPPAT Estate in Saint-Joseph and Hermitage and the VALLOUIT Estate in Cote-Rotie, Hermitage, Saint-Joseph and Crozes-Hermitage. The GUIGAL Estate vinifies and ages the wines of the Southern Rhone appellations in its cellars in Ampuis. The wines of the great Southern appellations Chateauneuf-du-Pape, Gigondas, Tavel and Cotes-du-Rhone are also aged in these cellars. In 2006, the Guigal family acquired the Domaine de Bonserine and supports its development although it remains independent from the GUIGAL Estate. We are not very far from the first few square metres of the small cellar where Etienne Guigal first laboured, but today there are 3 hectares of cellars and galleries which house barrels, tanks and vats. The history and the soul of the Guigal family are clearly present in these cellars which discretely house the most exceptional wines.