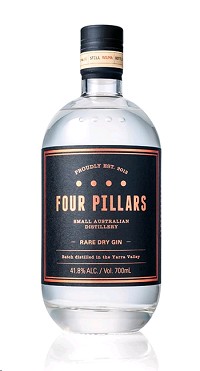 Four Pillars Rare Dry Gin is crafted to deliver the best of all worlds: a perfect, classic gin and also something that would fascinate and delight even the most hardened gin fanatic. It’s spicy but with great citrus, a truly modern Australian gin. Four Pillars Rare Dry Gin captures the essence of contemporary Australia’s heritage in Europe and Asia. We’re using whole oranges which is unusual but Australian citrus is highly aromatic and supports the spicier botanicals like cardamom. The cinnamon and star anise add rich fruitcake tones, the Tasmanian pepperberry leaf provides warmth rather than heat, and the lemon myrtle is a beautiful alternative to lemon peel. Our Rare Dry Gin has been awarded medals at a number of prestigious international competitions: Double Gold at the San Francisco World Spirits Competition in 2016 and 2014, Gold at the Global Gin Masters 2016, and Gold at the Hong Kong International Wine & Spirits Competition 2014. Producer We established Four Pillars with a focus on gin. But great gin doesn’t just make itself. We recognised that our real focus would need to be on the craft of distilling. If we could elevate this area of expertise in Australia, and bring a modern Australian sensibility to the process, then maybe we could make a gin worth shouting about. Two years later we have five different gins, multiple gold medals at international spirits competitions and now a brand new distillery operation and tasting bar. But the story starts back in 2013 we embarked on a tour of the US West Coast, from Portland down to San Francisco, identifying distilling techniques and equipment we admired. What stood out above all to us was that all the gins we loved on our trip were made in a Carl still. 18 months later, we took delivery of our own custom-built still from Carl of Germany, and we called her Wilma (after Cameron’s beautiful but explosively tempered late mother). And Wilma turned out to be amazing, drawing extraordinary botanical flavour from a combination of rare, native and traditional botanicals. She delivers an unbelievable purity of spirit (the gin comes out of Wilma at 93. 5% ABV) despite our unique approach of distilling our benchmark Rare Dry Gin with fresh, juicy biodynamic and highly-aromatic oranges. And she has now been joined by her larger sister Jude, and significantly smaller sister Eileen - both also made by Carl. From Rare Dry Gin to Barrel Aged Gin to Navy Strength Gin to Orange Marmalade (made with the oranges that make the gin) everything we do is designed to elevate the craft of distilling in Australia. We hope you agree we’re on the right path. The judges at a number of prestigious international competitions must think so, as we’ve been awarded a Double Gold, Gold or Master status for all our mainstay gins in the past two years.