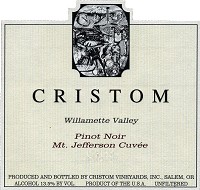 Wine maker notes Produced since 1994, Mt. Jefferson Cuvee is regularly rated one of the most popular Pinot Noirs on restaurant wine lists across the country. Made with a blend of grapes from each of the estate vineyards, and top quality fruit traded or purchased from neighboring vineyards, the Mt. Jefferson Cuvee conveys a rich diversity of place, deserving of its repuation as one of the most expansive yet stylistically consistent Pnot Noirs in the world.
Producer The development of Cristom Vineyards is the result of a twenty-plus-year collaboration between an engineer, a winemaker and a farmer - who are, first and foremost, stewards of the land. Founder Paul Gerrie hired Cristom’s winemaker Steve Doerner and Vineyard Manager Mark Feltz in 1992. Together at the winery since day one, they have consistently produced masterful and expressive Pinot Noirs. The four estate Pinot Noir vineyards - Eileen, Jessie, Louise and Marjorie - are named for Gerrie family matriarchs. Each single vineyard has its own natural variances in soil, elevation and exposition, and Steve strives to craft wines that are an honest recording of both the vineyard and vintage. While we are widely recognized for our single vineyard wines, nowhere is Steve’s gift for blending more apparent than in our hallmark Pinot Noir cuvees, Mt. Jefferson Cuvee and Sommers Reserve. Our winegrowing philosophy begins with respect for our land and estate vines, and the natural process of fermentation. The vineyards and winery are Certified Sustainable by Low Input Viticulture & Enology (LIVE) and are thoughtfully and meticulously farmed with a focus on quality. With minimal intervention during the winemaking process, Steve guides the wines from vineyard to bottle, producing the ultimate expressions of the stellar fruit Mark grows every vintage. The story of the Cristom estate is continuing to grow and evolve as we began planting a fifth single vineyard in 2014 named after our founder, Paul. A spectacular east-facing site in the Eola Hills, Paul Vineyard will help Cristom to become one of the greatest wine estates in the world.