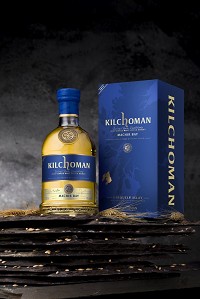 Founded in 2005, Kilchoman is leading the revival of farm distilling in Scotland on the Isle of Islay, and is the first new distillery built there since 1881. One of the country's smallest distilleries, Kilchoman grows their own barley and is just one of six to continue the tradition of floor malting. In order to maximize flavor and texture, these single malt whiskeys are distilled at one of the slowest rates in Scotland, are bottled at natural color and non chill-filtered.

Technical notes
(92) The first general release from Kilchoman, Machir Bay is named after the prettiest beach on Islay. It is a combination of three, four and five year old whiskeys aged in bourbon and refill sherry casks. Peated to 50ppm, aromas of peat and vanilla biscuit are quickly followed by black pepper, kelp and brine.

Producer
Established in 2005, Kilchoman (pronounced Kilhoman) is one of the smallest distilleries in Scotland. Based on a farm on the rugged west coast of Islay, Kilchoman is the first distillery to be built on the Island for 125 years. Kilchoman gives everyone the chance to see what is best about the grass-roots traditions of malt distilling. As well as being one of only a handful of distilleries still practicing floor malting, we also grow our own barley at the distillery, completing all parts of the production process at the distillery - from barley to bottling.