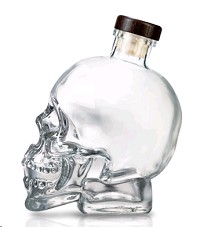 A quadruple-distillation process made Crystal Head as pure as vodka can be, but the quest for an almost mystical purity continued. As a final stage, the liquid was filtered through 500-million year-old crystals known as Herkimer diamonds. These quartz crystals are found in very few places in the world, including Herkimer, New York and regions in Tibet and Afghanistan. Perhaps because they share the raw material from which the original crystal heads were carved, they are thought to have similar spiritual qualities.

Review
The result was perfect vodka, with absolutely no additives. No glycol (an ingredient for engine anti-freeze); no citrus oil (used in its raw form as an insect exterminant); and no raw sugar. Nothing was needed, because it was abundantly clear that finely produced vodka came by its smoothness and flavor naturally. So in the end, the only things required were a glass and a pure spirit of one?s own.

Other text
A controversial archaeological mystery, 13 crystal heads have been found in regions around the world, from the American southwest to Tibet. They?re dated between 5,000 and 35,000 years old, and were supposedly polished into shape from solid quartz chunks over a period of several hundred years. Although according to Hewlett Packard engineers, they bear no tool marks to tell us exactly how they were made.

The heads are thought to offer spiritual power and enlightenment to those who possess them, and as such stand not as symbols of death, but of life. Dan Aykroyd is a well-known actor, musician, entrepreneur and spiritualist; a believer in what he calls the "invisible world" where otherworldly presences are a "form of reality as valid as our normal reality. " Partner and veteran fine artist John Alexander has exhibited extensively in the United States and around the world. Together, they were avid researchers of the legend of the 13 crystal heads. And from this inspiration, an idea was born.