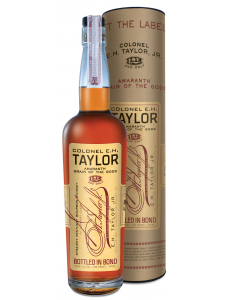 Vital Stats: Bottled in bond, 100 proof, 50% ABV. Distilled by Buffalo Trace with a mashbill of corn, amaranth, and malted barley. No age statement.

Appearance: Light orange or a pale honey. Looks to have a light body, even with the 100 proof.

Nose: Bright cherry, with a dash of toasted honey, or perhaps brown sugar.

Palate: This is where things get fun. Fruit with a long finish. Opens with a bit of maraschino cherry and then late harvest blueberry. There's some orange peel lingering in the background of the finish. Some oak in the middle. I know there are a lot of flavor words going on Caround here, but really, this whiskey is an experience.

The new Colonel E. H. Taylor, Jr. Amaranth Bourbon Whiskey makes use of Amaranth as a grain type alongside the more traditional corn (Buffalo Trace Mashbill #1) and malted barley. Amaranth was originally cultivated by the Aztecs and is called the Grain of the Gods. It is similar to wheat, but is said to offer a complex taste with subtle flavors ranging from a nose of butterscotch and spearmint, to a finish of pecans and dark berries.