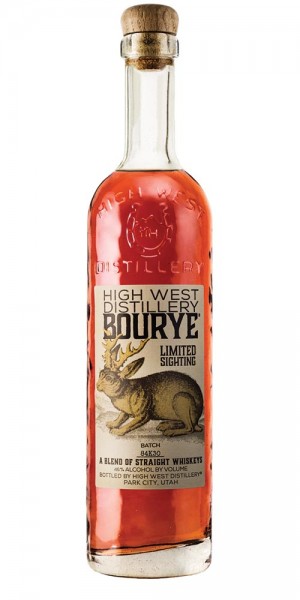 A unique and premium blend of rich bourbon and rye whiskeys, making for a premier sipping whiskey and one of High West’s all-time favorites. How to Enjoy: Bourye is best enjoyed around a campfire while looking at the Milky Way. Sip straight or with a little water. Not recommended with ice. The Name: Bourye is a combination of "Bou" for bourbon and "rye" for. . well, rye whiskey. Because combining bourbon and rye is a bit unusual, we couldn't help thinking of the jackalope. Honestly, we didn’t think anyone would like the name! Back Label Story: The jackalope, also called an antelabbit, is an antlered species of rabbit, a cross between a jack rabbit and an antelope. It is rumored that pockets of jackalope populations continue to persist in the American West, its native home. In the old West, when cowboys would gather by their campfires to sing at night, jackalopes would frequently be heard singing back, mimicking the voices of the cowboys. When chased, the jackalope will use its vocal abilities to elude capture. For instance, when chased by people it will call out phrases such as, “There he goes, over there,” in order to throw pursuers off its track. Legend suggests the best way to catch a jackalope is to lure it with whiskey, as they have a particular fondness for this drink. Once intoxicated, the animal becomes slower and easier to hunt (believe it or not, all this mythology is true, we didn’t make any of this up). That’s why High West created Bourye®, our proprietary blend of mature Bourbon and Rye, both favorites of real cowboys and sure to attract even the most finicky of jackalopes. All whiskeys in this carefully crafted blend are a minimum of 10 years old and sourced from multiple distilleries. See highwest. com for technical details and sourcing, that’s not a secret. However, the proportions are! Bourye® is best enjoyed around a campfire while looking at the Milky Way. Important! Jackalopes will attack if cornered or provoked. To avoid injury, quickly fall to the ground, remain calm and still, while humming the Roy Rogers song, “Happy Trails to You” (we did make this up!). Label designed by High West Distillery's very own Shelby Caret. Technical Details Ratio of component whiskeys: top secret! Filtration: not chill-filtered, or carbon treated. TTB Designation Class & Type: A Blend of Straight Whiskies Blend: A blend of straight bourbon and rye whiskeys aged a minimum of 10 years Proof & ABV ABV: 46% 92 Proof Age(s), Distilled by & Mashbill(s) 2018 Batch (New Label - year two): All sourced from: MGP, Lawrenceburg, Indiana 14yo - 95% rye, 5% barley malt 13yo - 95% rye, 5% barley malt 12yo - 75% corn, 21% rye, 4% barley malt 11yo - 75% corn, 21% rye, 4% barley malt 11yo - 60% corn, 36% rye, 4% barley malt Barrel Type(s): Whiskeys aged in new, charred white American oak barrels Sensory Notes Nose: English toffee, spiced orange crème anglaise, roasted walnuts, sweet basil, rooibos tea Taste: Sweet honey nougat, rich caramel, dark ginger cake, mulling spices, dried cherries Finish: Long & rich, roasted pecan, molasses, leather