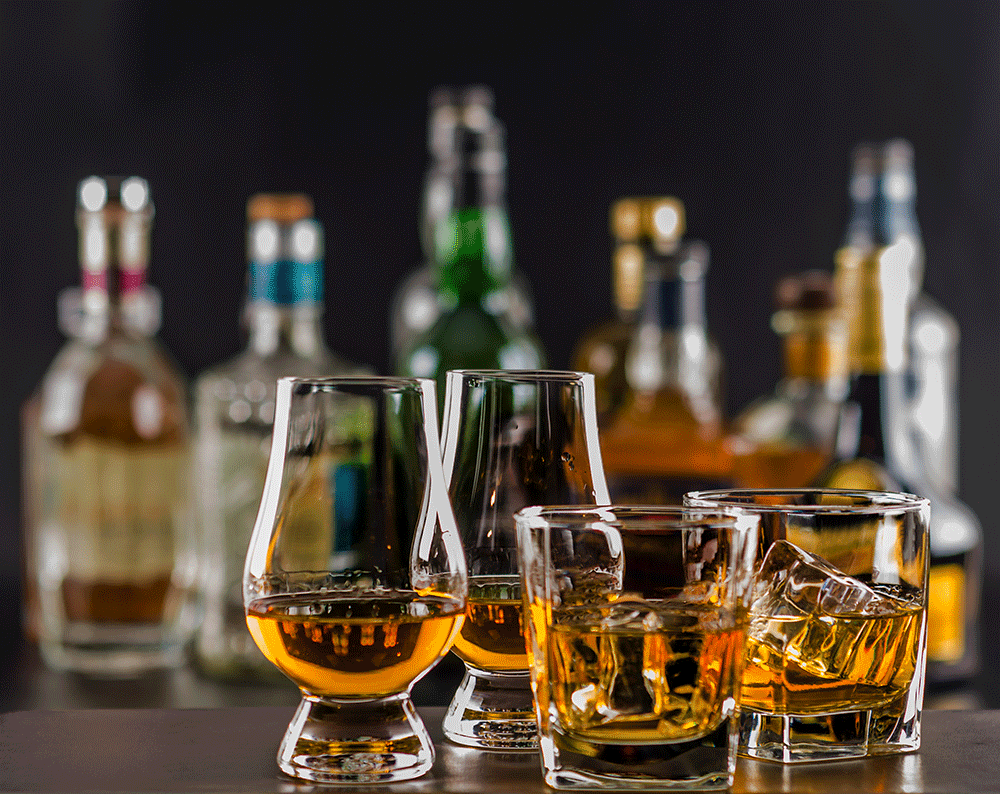 Whether you’re just getting started enjoying whiskey and its related beverages or you’ve been a fan of one or more of these drinks for a long time already, chances are good you may not know about the differences between each one. This is a common point of confusion for many newcomers and old pros alike, so don’t worry if you’re confused about this—you’re not alone. Below, we’ll give you a quick rundown of each of these drinks and help you learn how to distinguish between each one. This way, you’ll be more educated about your favorite drinks and you’ll be better able to choose the one that’s likely to please your palate the most, too. So let’s get started learning about the ins and outs of whiskey, Scotch, and bourbon right away.

Whiskey
Whiskey is a dark brown alcoholic beverage that is made from fermented grain. This grain may be either rye, corn, wheat, or barley, depending on the type and flavor of whiskey in question, but no matter which type is used, it’s always mashed before the fermenting process. After the fermenting process is complete and whiskey has been distilled fully, it is aged in wooden casks, usually made of oak that has been charred to help impart the brown color and smoky flavor that whiskey is so well known for.

Whiskey is often used in cocktails that have more of a kick behind them than some others. It can be enjoyed on its own too, however, and it really all depends upon the way the drinker wants to drink it. There are a wide variety of types of whiskey out there, and the term “whiskey” actually refers to several different types of drinks that fall under this umbrella term.

So what about whiskey versus whisky? Are they two different things? Absolutely not—they are exactly the same thing, but the term is spelled with an ‘e’ in it in the United States only. This is a good way to tell just by a quick glance at the bottle whether you’re drinking a whiskey from the U.S. or a whisky from elsewhere in the world!

Scotch
To begin with, Scotch is a type of whisky (take note that this is not the United States spelling of the word). Like certain types of wine and champagne, the name of this drink relies on where it has been made. Scotch whisky can only come from Scotland, and any type of whisky that comes from elsewhere in the world cannot be called Scotch. The distillation process used in making Scotch dates back to at least the 15th century and is a tried and true tradition of the country.

Scotch whisky is almost always made from barley that is malted, rather than from any other types of grans that may be used in other types of whisky. When distillation is complete, Scotch whisky is placed in oak barrels to age, but these barrels may or may not be charred as they would be with non-Scotch whisky and whiskey. Depending on type of Scotch you’re enjoying, you may find that it tastes similar to bourbon, but this is not true of all Scotch, either.

Most of the time, Scotch is served either on its own in a glass, or with one or two ice cubes or ice balls. (These are referred to “neat” and “on the rocks,” respectively.) However, you can also enjoy Scotch whisky in a cocktail, although many who are true Scotch fans will frown upon this. In the end, however, it’s entirely up to you how you want to enjoy your Scotch, but keep in mind that you may be offending a friend if you put it in a cocktail!

The aging process is very important to Scotch whisky, and the age of a bottle of Scotch will always be visible and noticeable on the front of the bottle’s label.

Bourbon
Bourbon is a type of whiskey—this time, take note that it is spelled the United States way. This is because bourbon comes specifically from Kentucky, and any whiskey made elsewhere in the United States cannot be referred to as bourbon officially. While Scotch whiskey must be made from malted barley in almost every situation, Kentucky bourbon must be made from at least 51% corn mash instead. This gives it an entirely different color and flavor than other types of whiskey or whisky.

In order to be classified as a real Kentucky bourbon, the whiskey always has to be kept in charred oak barrels after distillation is complete. If it is not, then it simply isn’t Kentucky bourbon. This bourbon also cannot, legally, have anything else added to it in order to be called a bourbon. It may be surprising to some that there are so many rules associated with bourbon, but it’s got its own culture just like other types of whiskey do, too.

Bourbon, like other whisky, can be enjoyed on its own or with a couple of ice cubes to cut the flavor if you prefer. However, it’s much more commonly used in cocktails than the others whisky on our list, and there are dozens of options if you’re looking for a tasty Kentucky bourbon cocktail to help introduce you to this classic beverage. One of the most popular is the Old Fashioned, which is a well-known and long-lived classic. Another longstanding favorite, especially in Kentucky itself, is the mint julep.

Honorable mention: Rye
Although not often considered in the same category as Scotch whisky or Kentucky bourbon, rye whiskey still bears mentioning. This type of whisky (or whiskey, as it can come from anywhere) is made with at least 51% rye and must be at least two years old, if not older, to be classified as such. It’s lesser-known than bourbon but similar in flavor and style, so it’s great for cocktails and for anyone who is trying to ease into the world of drinking whisky.

Conclusion
There’s a lot to keep in mind when you’re trying to learn about the different types of whiskey out there. By keeping these differences straight, you’ll be well on your way to enjoying whiskey, Scotch, bourbon, rye, or any other related beverage you might be interested in!